While we are poised to take advantage of forward momentum as the economy eventually recovers from the Covid-19 pandemic in 2021, we are alerted to signals of austerity measures, tight budgets and wiped-out segments of the economy. We remind ourselves and our clients that the silver lining of massive change, adversity and hardship glimmers with potential opportunities.

RadPrime Marketing leans on an optimistic lever that things will improve in 2021 as we realize a strong potential for the economy to fluctuate—wildly. To be successful we know we will need to continue to formulate new ways to find, attract and serve our client’s customers whose needs and desires will continue to evolve.

Trends that will have the most significant impact in marketing

The journey of volatile economic recovery from the Covid-19 pandemic will certainly affect everything concerning our accounts from client budgets and target markets to content and campaign tone. We fully expect and recommend that each client become even more focused in carefully evaluating every marketing campaign expenditure and its effectiveness.

What is your company outlook for 2021?

RadPrime Marketing senses a cautiously optimistic business outlook in 2021 that demands being alert, mindful and vigilant as we all evolve from what was pre-2020 normal. Technology that we have used to connect with each other will be here to stay even with a significant pent-up demand for widespread travel, collective experiences and social interaction.

The cast and crew of “One Day Two Ways: Scottsdale”, an episode of American Airlines’ travel documentary series, shot the episode in the McDowell Sonoran Preserve, Scottsdale, Ariz., wrapping up production of a climbing and hiking segment for the show July 9. The episode is set to be broadcast on American Airlines flights every day in November.

Kalina played the on-camera role of adventure guide with fellow Phoenix-based 360 Adventures guide Peter Tagala, who was host of the episode.

The video production team from Ink, the world’s leading travel media company, selected 360 Adventures to lead the climbing and hiking segment, provide rigging for the cameraman and support the video production.

For more information, see Ranking Arizona Awards, sponsored by AZ Big Media, established in 1985 as a publisher of AZ Business Magazine and Ranking AZ, an annual publication covering the outcome of the largest business opinion poll in Arizona at RankingAZ.com covering a multitude of niche topics and industries, and sponsor of the yearly award receptions for Best of the Best Arizona Companies. The Most Admired Companies, Most Influential Women in Arizona Business, Health Care Leadership and CFO of the Year.

Ranking Arizona announced the winners of the awards in the 22nd Annual Edition of Ranking Arizona, The Best of Arizona Businesses, published in March 2019. An awards ceremony is set for May 2, 2019, at JW Marriott Camelback Inn, Scottsdale, Ariz.

For more information, see Ranking Arizona Awards, sponsored by AZ Big Media, established in 1985 as a publisher of AZ Business Magazine and Ranking AZ, an annual publication covering the outcome of the largest business opinion poll in Arizona at RankingAZ.com covering a multitude of niche topics and industries, and sponsor of the yearly award receptions for Best of the Best Arizona Companies. The Most Admired Companies, Most Influential Women in Arizona Business, Health Care Leadership and CFO of the Year.

RadPrime Marketing has teamed up with Millennial Marketing to produce a series of videos for a sales team toolkit and to promote enterprise-level labor management software for PrimeTime.

PrimeTime, Inc., headquartered in Scottsdale, provides in time and labor management solutions through easy-to-use software and data collection methods. Founded in 1988, the company offers software and applications for employees to track their time from any device.

Matt Kalina, founder of RadPrime, won the Board Member of the Year Award at Spectrum Awards 2018, presented by American Marketing Association, Phoenix Chapter.

Kalina, vice president of membership for AMA Phoenix, serves on the association’s board of directors. AMA Phoenix is the largest industry group for Phoenix Metro marketing, ad and public relations professionals.

Approximately 250 marketing professionals from the Greater Phoenix Metropolitan Area participated at the 16th annual Spectrum Awards event at Sun Studios of Arizona, Tempe, Ariz, May 10, 2018. A total of 37 finalists, representing advertising, marketing and public relations professionals were recognized at the awards event and 53 awards were presented.

Phoenix: An emerging hot-bed for tech innovation and digital marketing 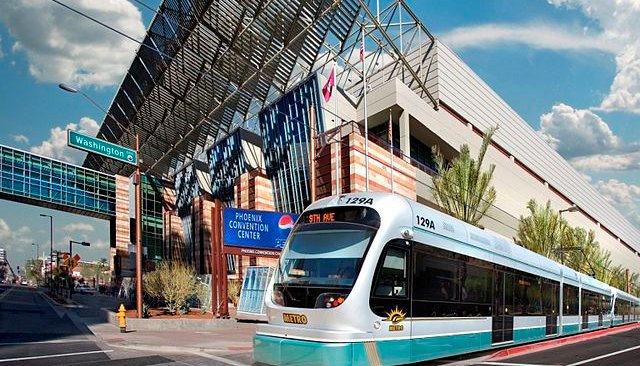 Phoenix is quickly becoming a U.S. hotbed for tech innovators and digital marketers as it grows into one of the newest big tech centers in the country.

There’s a lot happening in Phoenix and in the surrounding Valley of the Sun. You may know that the Phoenix Metropolitan Area is one of only 13 U.S. metro areas to have all four major pro sports teams. But did you know it’s also the 13th-largest U.S. media market ranked by The Nielsen Company and has the 13th-largest convention center in the country? It’s also one of the top travel destinations in the United States, ranked tenth in number of hotel rooms at 66,500, with some of the top resorts in world.

Beyond its epic professional sports, entertainment and luxury travel amenities, Phoenix ranks as the sixth-largest U.S. city, and its huge metropolitan area is home to large corporate, operations and regional offices for the digital marketing, data services and high-tech industries.

The area has emerged as a hot destination for the operations of fast-growing tech start-ups and fast-growth companies, such as Axosoft, CA Technologies, Limelight Networks, Nextiva, SOOH Media, Uber, Weebly, Yelp, Zenefits and ZocDoc.

Hot beds of innovation and creativity are springing up from East to West in the Valley of the Sun, especially in Downtown and Innovation Corridor in Phoenix, and in Chandler, Mesa, Gilbert, Tempe and Arizona State University, home to the largest enrollment by a public university campus in the United States at more than 60,000. Meanwhile, Scottsdale features several high-growth tech and innovation cores, including its Galleria Corporate Center located Downtown, Loop 101 corporate corridor, Scottsdale Airpark and SkySong Innovation Center.

Become a part of the growth and excitement in innovation and digital marketing by joining the top industry group for Phoenix Metro marketing, ad and PR pros: www.AMAPHX.org.

We are here to answer any question you may have about our Agency. We will respond as soon as we can.